Ashes to ashes, and dust to dust… Bio-Pure, beginning to END.

Theoretical Bio-Pure’s final end product is carbon dioxide and water.  I say theoretical because the bacteria eat the contaminants (organic carbon forms), they grow and multiply into more bacteria.  At the same time, they are using more organic matter to convert to energy.

Some of the hotdog’s organic matter is converted to cell mass in the bacteria.  The bacteria cell grows and then divides into two cells using the carbon, nitrogen, phosphorus and other elements it acquired from the hotdog.  Now you have two cells.  Let’s say that took fifteen minutes.  In another 15 minutes those two cells divide and now you have four cells.  Another 15 minutes, eight cells, another 15 minutes and you have 16 cells.  So after one hour, 16 bacteria cells and one partially-eaten hotdog.  After two hours 256 cells. After three hours, 4096 cells.  After four hours 65,536 cells.  After five hours 1,048,576 cells.  After six hours 16,777,216; and so on, and so on, and so on.  The point is you are making a heck of a lot of cells, so there goes a lot of the organic carbon (formerly part of the hotdog) to make them.  Let’s just say 50% of the organic carbon went to the new bacteria cells to construct new tissue.  The other 50% was burned up through respiration and was lost as CO2.

Now the hotdog is all gone!  Bad news for the bugs.  They start to starve since there is now no food.  Some cells die.  They become a new food source, but because the cells are starving, most of the ‘new food’ is used just for energy, meaning more carbon is lost. This process continues until you are down to two cells.  One dies, the remaining cell eats it, uses up the energy, more CO2; and then finally the last cell dies

But there is nothing left to digest this cell so it remains there dead, but nothing to break it down.  One cell and a bunch of CO2.

Okay, the above is far from what really happens but good enough for an example.  A real system is not isolated from the environment so there is a lot more going on.  But for your purposes, the organic matter (the contaminant) is broken down and converted to CO2 and H2O.  To what extent (1%, 25%, 50%, 75%, 99%) depends on how much time the system has to let the bacteria do their job without more contaminants entering the system.

I must also add that in some biological processes, some bacteria (including ours) can also use certain forms of nitrogen compounds as a part of their energy cycle if oxygen is not available.  The final product of such reactions can be one of several nitrogenous gases (N2, NO, etc.) that escape form the system.  But this is far secondary to the carbon cycling.

I hope this helps.

(BTW – the hotdog example was just that, an example.  Everyone knows that hotdogs are not made of biodegradable matter) 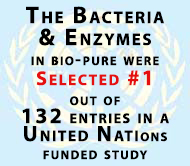